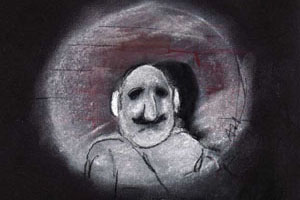 Postalgia is an investigation on mental and physical oppression. it combines puppets and performers to explore the oscillations between perception and imagination.

The initial concept of Postalgia is to challenge the role of puppetry by applying a contemporary, innovative and fresh approach and methodology which include a collaborative work in an open creative process, a transparency of the operative process and of the performance and the treatment of the space and of the audience.

Postalgia is funded by Arts Council England. The project has been supported by the Puppet Centre Trust and the Little Angel Theatre. Two post-show discussions have organised in partnership with British Unima.