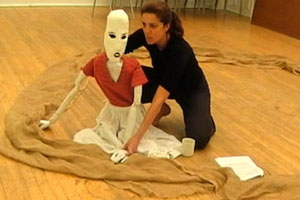 This research work is based on the play Seaside written by French playwright and novelist Marie Redonnet. The piece unfolds the story of a former dancer, Onie, who finds herself in a desolated place on Christmas Eve after her car breaks down. She encounters a young girl, Lolie, who lives alone with her grandmother and to whom she will transmit her passion for dance. Later in the night, a lost young man arrives in this remote place and will be the first dance partner of the young girl. At the end of the piece the dancer disappears and only the puppets-characters remain.

Seaside is a solo piece where the main character is performed by a dancer-puppeteer. The other characters are puppets. Onie animates them, one after the other, in order to dance with them for the last time in her life.

We have organised two work-in-progresses, one in July 2007 (mentored by Nenagh Watson), and more recently, in July 2008.

Translation of Seaside by Claire Doucet.

VIDEO OF THE FIRST WORK IN PROGRESS