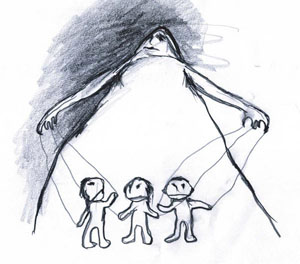 Freely adapted from a French novel written in the 1950s by Boris Vian, Heartsnatcher is an original play using both actors and puppets on stage. The idea of mixing those two forms was to recreate the dark, macabre, poetic and absurd atmosphere of the novel.

When human people start to interact with puppets something really magical appears that takes the audience to new territories.

Set in a bizarre and slightly sinister town where the elderly are auctioned off at an Old People Fair, the townspeople assail the priest in hopes of making it rain, and the official town scapegoat bears the shame of the citizens by fishing junk out of the river with his teeth, Heartsnatcher is Boris Vian’s most playful and most serious work.

The main character is Clementine, a mother who becomes increasingly obsessed with protecting her children, going so far as to build an invisible wall around her property. These events are observed by Jacquemort, an elegant psychiatrist appalled by the town's oddities, who searches for someone to psychoanalyze in order to fill the void in his own personality.

In this play about an abusing mother and her three boys, the children are performed by puppets and all the other characters by actors. At the end of the play the actress acting Clementine will transform into a giant puppet.